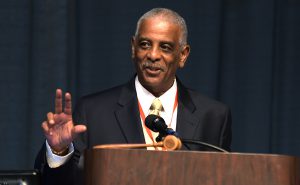 McMillan was a lead plaintiff in MEA’s 2010 lawsuit seeking the return of money taken by the state from school employees’ paychecks. During the long court battle, McMillan joined protest marches and press conferences and delivered petition signatures to Gov. Rick Snyder.

Her husband, Chuck McMillan, accepted the award in her honor. Deborah spent a lifetime dedicating herself to students through action and advocacy in her community, her school, and her union, Chuck said. She taught for 40 years in Michigan schools, 28 of those in Lansing.

“You must never forget your role as educators in protecting what is sacred in our democracy,” Chuck told the crowd of more than 300 delegates in attendance at the Fall RA.

McMillan passed away in March, still awaiting a decision in the so-called 3 percent retirement case she had championed for seven years through three appeals by Snyder. Oral arguments are scheduled before the state Supreme Court on Nov. 8. (Stay tuned to this space for events planned around the court date.)

In other RA action, MEA President Paula Herbart addressed the meeting for the first time as the union’s highest elected officer. She told the crowd that the new leadership team’s Listening Tour this fall has revealed members and leaders more committed and passionate than ever.

And in her final address to the RA, retiring Executive Director Gretchen Dziadosz advised local leaders to avoid looking backward at what’s past and instead look forward to what’s possible – energized bargaining, legislative advocacy, professional development, and member advocacy.

“You are more powerful than you know,” said Dziadosz, who announced plans to retire next February after 38 years at MEA. “I know it does not always feel like it, but educators are respected in our communities. Don’t ever forget that!”

The meeting included speeches from seven candidates for Michigan governor who framed the high stakes for public education in next year’s election. Read more, watch the speeches, and participate in a survey gauging member interest in the candidates.

Recording of teletownhall with medical experts on COVID-19 and school reopening
July 31, 2020

COVID-19 Update and Invitation for 9a Friday teletownhall
July 29, 2020

Don’t forget to VOTE in next Tuesday’s primary election
July 29, 2020